When Old is New…

Marketing: When Old is New

Recently, while I was playing in a golf outing with a group of guys, we were waiting at a tee box and someone’s cell phone in the group ahead of us went off. Two of the other three guys in the group, immediately made a comment about the “damned cell phone” … Three out of four of us are self-employed, so you probably don’t have to think too hard to figure out that the two who commented were the other self-employed guys.

I think it’s kind of interesting that a few years ago, when the technology of phones was improving almost daily, everybody had to have one and they had it almost attached to them. You heard those in seminars and meetings asking attendees to “silence their cell phones”, yet you rarely hear that request any more. Now I’m hearing more complain about that damned phone, even comments like “sometimes I’d like to just toss that damned thing.” More and more talk about turning off their cell phones when they go home or arguing with their wife about who’ll answer the landline, if they have one.

Barbara Cochran of Shark Tank and real estate investment fame, when asked how she was able to run such a powerful business and still have quality time with her family, stated that when she walked in the door of her apartment, she took her cell phone and left it on a table near the door, not answering it while she was at home, commenting that’s “my time, to be with my family.”

More and more, including younger people, want to go back to when they weren’t so easily accessible all the time. 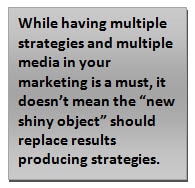 A few months ago, I hosted a two-day event with clients attending from around the country to learn more about marketing their businesses; many are always on the lookout for the “new shiny object.” As most entrepreneurs are inclined to do, we think maybe we’ll finally find the magic bullet. While I did present them with some “shiny new objects”, one of the presentations was about NOT abandoning the tried and true core marketing strategies that continue to produce results. I talked NOT abandoning what has been, and is still, working. We reviewed some of those mainstays, and I encouraged them to go back and revisit some of the tried and trues they had abandoned.

The amazing result was I had many come to me during a break and tell me how it helped them realize they had stopped using some really successful marketing and hadn’t even realized it. Some mentioned they were going home and bring back those strategies and ads that had worked well for them… One attendee told me he had a program he purchased from me back in 2003, that he still used and was still making money with (I should have charged more for it!) He also said he couldn’t imagine his business not doing it. Some of the others then chimed in that they, too, had been using it for years, with a huge amount of success.

Another attendee mentioned an ad he uses, that I delivered as part of his consulting program in 2004, which still produces results at least twice a year for him. Sometimes it’s the same ad with a different name taking advantage of certain holidays or current events.

Last fall I took a proven, tested offering for a niche group I work with and re-themed it to tie in with one of the hottest topics of the election.

I recently brought on a new consulting client and presented a marketing campaign to him. His response was, “look I did this already and it didn’t work very well.” I proceeded to convince him to do it again using my marketing strategies and the right media and having it go to the right list. The success he had from it was off the charts; in fact, it worked so well he called and said stop the marketing, we can’t keep up.

Obviously, I don’t expect everyone to completely give up their cell phones, nor do I think it’s a good idea. I do know that only family and close friends have my cell number, that’s my personal preference. Look back and take an inventory of what you’ve used successfully in the past that you don’t use or haven’t used for a while. 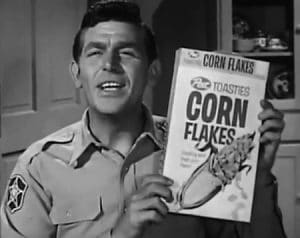 Look around you and you’ll see companies bringing back “classic” ads from years ago and getting great results from them, some even bringing them back in their original form.

I have a client who abandoned a direct mail strategy several years ago that produced tens of thousands of dollars worth of business for him. He became convinced that because his business was in “silicone valley”, all of his advertising had to be online because that’s where all of his clients were, stating “his clients were different.” His business had been on a downward slide for a couple of years as a result. I convinced him to go back and bring out that direct mail campaign. The result was again tens of thousands of dollars in revenue, not as much as the last time but it had brought in more than anything else he’d done in two years. This is a perfect case where an old strategy looked like something new.

The bottom line is: if it works keep using it until it doesn’t! While having multiple strategies and multiple media in your marketing is a must, it doesn’t mean the “new shiny object” should replace producing strategies. They should add and supplement the marketing that is producing!

I talk about this and other marketing strategies in my publication called The Marketing Edge; if you’d

The best approach is to take something that has worked in the past and adapt it a bit to use with different media or a slightly different look. One example of that is the traveling medicine show from the 1800s that used to travel around the country. The whole premise is, they would go into a town and entertain the town folk for a little while, thus earning the right to pitch the medicine to them.

Think about it – what happens in today’s television shows? They come on, entertain you for a few minutes and then spend a couple of minutes selling (commercials) you something, they come back and entertain you for a little while again, then attempt to sell you something again. It’s a perfect example of taking a model that worked previously and adapting it to a new media and giving it a fresh look.

I was recently consulting with a highly successful marketer, who hosts live events a couple times a year. He mentioned that his closing rate was declining; he went back and looked at video from past events where his closing rate was high and realized he had abandoned several strategies that he had used in the past. Once he re-incorporated them into the event, his close rate went right back up.

I still even use an ‘old’ typewriter font and style in sales letters because it’s known to improve response rates with certain target markets.

Remember a lot of “classic” marketing that is brought back is “new” for many!

To get your FREE two-month subscription to The Marketing Edge, click here now to take advantage of this offer for a limited time.