Right Message for Your Prospect

I was recently a speaker at a trade show in Las Vegas where I sold from the stage. I did so against the advice of several people, telling me what a tough crowd it was, that they don’t buy, especially from outsiders and…

I went anyway for a couple of reasons: one being the challenge. I love a good challenge. I’ve been in front

Here I am speaking to a room full of entrepreneurs at an event in Las Vegas, NV.

of many “hostile” groups before and came away in pretty good shape. I once agreed to speak to a women’s only group and as I’m walking in the door, just minutes before the meeting was to start, I was told “you’re the first male speaker in the history of our organization.” I felt a little added pressure there, but again walked away with many kudos, and more importantly, many sales. To take it a step further, one of the officers of the state organization for this group was in attendance and asked if I’d be willing to speak their state association meeting. I ended up being the keynote speaker for that event, speaking to a packed room, and was able to pull several clients from that speaking opportunity also.

By the way, the results exceeded everyone’s predictions on how I’d do at that trade show in Las Vegas. One veteran, who spoke to the group and was an insider, mentioned that he couldn’t believe the comments from people who “thought I was one of them.”

I’m not telling you all of this just to tell you I’m a great speaker. I’m sure by most people standards I’m not; maybe okay, but not great. For me, I judge based on results, not applause or praise. The reason I mention these is to give you what seems to be a bit of a “secret,” although not really in my mind.  It’s something that I just do; not thinking it’s some kind of secret or something special. That is, I prepare whenever I go to speak to any group, even if it’s one I’m especially familiar with. One of the things that is part of my preparation is to learn as much as I can about the group I’m talking about, their language their pain…

Speak to Them in Their Language

I’ve heard people comment on it before with, “You know Dan, if he can’t do it all the way…”  It’s just part of the way I learned to do things.  Doesn’t mean that I’m never surprised, but my goal is to keep the surprises to a minimum.  I prefer for the audience to feel as though I know who they are and what their challenges are.  I take the time to learn and am willing to go the extra steps.  With the trade show group, I called several people who were in the group or “one of them” and talked to people who had spoken to them in the past.  I learned part of their language, what some of their likes were – and especially what they didn’t like and what keeps them up at night. I even learned what the appropriate dress should be.  It’s different than it was, for example, with the women’s group.

Something else I did was to find out about the trade show they were attending and who the other speakers might be. There were several other speakers who were speaking on the subject of marketing.  Another step I took was to contact someone with the trade show in charge of their magazine that went to all of their members and offered to write articles for them. They were happy to get free content for their member magazine and it was a great opportunity for me to be in front of them and to promote my speaking to their group.

The attendance in my room was double what I was told to expect. A big reason for this was the articles I wrote.  I gave them good information but always left them with, “I’ll be talking more about… at the trade show on…” Letting them know I would be there, what date and time, and continuing to remind them that I would have a very valuable gift for those who attended, a gift that they could use to increase their business and their profits.

Here’s what this all comes down to — Preparation! Preparation has always been part of what I do even when speaking to groups I am familiar with. I try to find out what their hot buttons currently are and speak to them, so they know that I know. Preparation isn’t just important for me, it’s critical. I’m not only shocked but surprised at how many people do little or no preparation before they go in front of a group, sometimes using the wrong language, the wrong look and … Some don’t even have their presentation prepared properly.

A key element that is part of my preparation to make sure I have the Right Message for that particular audience. It’s what endeared me when I spoke to the women’s organization. There were more than a few who weren’t crazy about having a man as their speaker. My message was right for Them!

The Right Message is a key part of Dan Kennedy’s Famous Marketing Success Triangle, and I’ll be talking more about all aspects of Dan’s triangle at next week’s Small Business Marketing Workshop; for more info and to register to attend the workshop click here. First timers attend for FREE!

I host live events regularly and often use guest speakers. Some of the speakers are surprised that they will be held to a time limit, even though this was communicated to them before the event. I’m guessing they thought it wasn’t for real or something. I’ve even gone so far as to go on stage and get a speaker who went too long. My preparation, as I said, is also a part of what I do with groups I’m familiar with. I had a speaker not show at one of my events even though he had confirmed just a few days earlier; with no warning, he just didn’t show. Here’s the thing: there wasn’t a lapse in the event at all as I had prepared an additional presentation of my own, for just such occasion. Some of the people who were working with me were asking, “What are you going to do?” and my response was, “I’ll handle it.” I filled a seventy-five-minute time slot without the audience even realizing that something major had happened.

Again, the point of telling you this is not to say look at me; it’s to convey the importance of preparation any time you get in front of a room. Use that preparation to stack the deck in your favor as much as possible. I spoke to a group of Chambers of Commerce and, knowing how they just let people know about events and don’t really to market them, I told them that I would speak at no charge if I could market the event to their members, including after they signed up. Typically, at their events, about 70% of the people who sign up actually attend even though they paid in advance to attend. Knowing that, they wisely overbooked the event. I continued to market to those who signed up to make sure they actually attended.  For that event, they had a 94% show-up rate, resulting in them scrambling to bring in additional chairs to seat the unexpected numbers.

For me, if I was going to speak for free, I wanted as many opportunities in the room as possible. It turned out to be a very profitable 90 minute “free” gig for me. Only because I choose not to leave anything to chance – “preparation.” It was a win/win/win event; the Chamber was thrilled because they had a room full of people who paid to be there and walked out raving about how much value they received.

Many make a big deal of how well prepared I am when I speak or put on an event, but for me, I almost never feel as though I’m prepared enough or ever quite satisfied.

“He who fails to plan is planning to fail.”

I’m surprised to learn that more people aren’t prepared or how little they’re prepared. I’m shocked at how often I have speakers scheduled to speak at one of my events who don’t call to ask me questions about the group they’re going to be in front of! Most don’t get another opportunity with me. 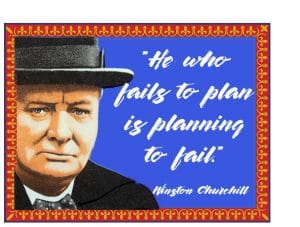