Oh No, Not the Clydesdales!

Anheuser-Busch recently announced they would NOT be using the Clydesdales in this year’s Budweiser commercials. Their stated reason was that the millennials (21-27 year olds) don’t know about the Clydesdales and they don’t have a connection to them, thus they won’t connect with 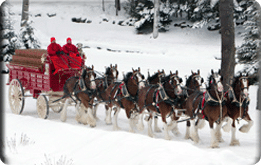 They go on to say they are developing ads that will better connect with millennials, also saying they want to have their ads in the places where millennials hangout and are more likely to see them. They’re looking for a way to connect with them. Their new spots will feature Jay Z and zombies. That’s a great idea!

Maybe they should get an ad agency that is not so narrow-minded. Is there any reason they can’t implement the strategy for attracting millennials while at the same time continuing a long held relationship with the millions of people who are NOT millennials?

Why would you cast aside a long held symbol of your company that the largest economic group in the country loves and responds to? I’m talking about the Boomers and many of their kids who grew up with the Clydesdales, and have enjoyed and oohed and awwwed over the Clydesdale commercials for years, especially during the holidays, even to the point of having Budweiser  Clydesdale Christmas decorations displayed in their home.

Here’s something that I learned early on when it came to marketing, in fact I now teach it when speaking to different businesses and business groups. You should segment your list and communicate with each group so that they know you’re talking to them directly. It’s called message to market match.

I recently did some private consulting with a roofing company; they asked me why their direct mail campaigns weren’t getting results. Once they sent me the ads in question, I asked for more information about who they were mailing to. They couldn’t tell me most of the basics like, income levels, age of their target market, even how old their homes were. They were mailing to cold lists they had purchased in certain geographical areas, in other words they couldn’t match a message to their market because they didn’t know anything other than the address of their target.

When pushed for the information they weren’t willing to do the work necessary. Thus they were warned that a generic shot-gun type of message would be all that was possible and that the results would not be great. The first mailing they sent with the revisions I made brought a little over a 1.5 percent response rate. By industry standards is considered good, not something I was happy about. They were thrilled to death, citing a huge improvement. The sad part is we could have easily seen results that were two to three times the response rate they did get.

My point to the story is that Budweiser could and should go after millennials if they feel they are a good market for their product, BUT that doesn’t mean they have to abandon the other segments of their market. They can still use a tried and loved message and have it run where the consumers who would relate to it are hanging out. Put it in the places they are most likely to be. Don’t just get rid of it, especially since it still brings a response, as evidenced by their response to the response of their announcement, see below.

I realize the need to expand your reach, that doesn’t mean going after one segment and using that same message for all. At one of the recent Marketing Workshops (www.NoBSCleveland.com) I conduct here in the Cleveland area I heard one of our very sharp marketers tell another attendee who had recently made a purchase from him online that they would now be talking to him very differently than they had before. In other words he was being segmented and their message to him, the buyer, would be different than it was to him, the prospect.

The question is, are you making the same mistake Anheuser-Busch is making? Are you functioning in such a vacuum? If you aren’t segmenting your list and talking to different segments of your list with different language and even different offers you’re hurting your response rates. I suggest you make it a priority to do so in the future.

This is true not only with your list but also with the cold lists you’re marketing to. Learn as much as you can about your target and craft your message for them.

It’s obvious they are still missing the boat, since there was that much of a response; you would think they would realize there is a very large group of people they will be abandoning, while trying to reach them via zombies.

If you would like to attend or more details this month’s marketing workshop on January 20th give my office a call at 440-842-8938 or visit www.NoBSCleveland.com