Being About More Than…

Businesses traditionally advertise two things that are killing their response. Their service and/or their product!

We get so enamored with our business, what we do and what we offer, that we only talk about those things in our advertising/marketing. What your marketing really should be talking about is what your prospects/clients want!

Let’s face it; very few if any of us are without competition, and because of the proliferation of information available online, it’s getting more difficult to prevent what we do from appearing as a commodity. You can prevent this appearance by with your marketing by obtaining some measure of differentiation. I’ve talked about this at length and again in this month’s issue of The Marketing Edge, where I talk about customer experience versus customer service.

Another way to prevent being commoditized is to have your marketing address what your prospects really want when it comes to what you deliver. Years ago I owned a repair shop and, within a one mile radius, there were fifteen other repair shops that I competed with ranging from national chains, such as NTB, Firestone, Midas and more to regional chains to local mom and pop shops. Yet, I had a bigger and better presence than most of those other 15 shops even though my prices were higher than most.

One of the ways I was able to accomplish this was by addressing what my prospects and clients really wanted. You see, we all had a warranty of some sort, yet mine was for a longer period of time and more encompassing. I knew this was important because I surveyed clients and my competitor’s clients and they told me how important the warranty was to them. My warranty was better because it was a national warranty, which meant if they were traveling and a repair or part that we performed failed within the warranty time they could get it fixed wherever they were, without paying for it up front and then waiting for to be reimbursed. You might say, yeah but you said some of your competitors were national chains, and they have national warranties. You’re right, but they did a terrible job of marketing that to their prospects so they might as well have not existed!

Another place where I blew my competition out of the water was that I realized the number one resistance to getting people to book an appointment to have their vehicle serviced or repaired was their challenge of how full their schedule was and trying to find a time when they either be without their car, or how they would get to and from work or home.

I quickly made their challenge our challenge. Instead of “hoping” they could figure their challenge out, we figured it out for them! We made the investment in additional staff and a vehicle so that we could go to their home and/or the place where they worked, pick up their car, service it and bring it back to them. We did this back when our competitors weren’t. We solved their biggest challenge to being able to spend money with us; it also took away price resistance and improved our ability to make additional sales if needed.

Not only did it increase our sales, it increased customer loyalty and made it much easier for them to refer others to us.

It gave us a competitive edge and made our competitors less relevant. Many of those 15 shops in the one mile radius were able to fix the cars just as well as we did, but they didn’t offer what we did and that was what our prospects and clients wanted.

Our prospects didn’t even know that’s what they wanted. We figured it out when they weren’t asking for it because they didn’t think they could. It didn’t take long for our competitors to catch on, but by then we began to take it even a step further, so that they were always playing catch up.

What we did do was quit making it about fixing cars and offering the same line of tires and oil that everyone else offered. We made it about what they wanted – a good warranty, that was easy to use and didn’t have a bunch of loopholes or hoops for them to jump through. We also made it about eliminating their number one challenge when it came to being able to use our service.

Those were just a couple of the ways we made it more about what they wanted versus what we offered. Another is that we began washing their car for them when it was in for service. It took our competitors a while to duplicate that one because they didn’t have room to wash cars. Well, we didn’t either, but I brokered a deal with the local car wash and would take them there and let them wash our customer’s cars for us. Guess who became one of our best referral sources? The car wash! We were the only one of sixteen shops in the area they were referring people to because we were spending money with them on a weekly basis.

Another example of being about more than fixing cars and selling tires was when we offered free chair massages for a whole day! How many of our competitors do you think did that? In fact, I was chastised by many other shop owners because “you can’t do in a repair shop.” A few years before, that would have been enough to stop me from doing it, but at this point in my marketing career, I knew it was a good thing to do!

The result was that people in the community and surrounding communities were talking about how we picked their car up and brought it back, how we washed their car while we had it, and how we gave out free massages at our shop… They weren’t lumping us in with the other shops and talking about how much we charged versus how much they charged!

In the auto repair industry the number one thing that gets advertised is an oil change. We didn’t advertise an oil change; we advertised an oil change that came with a free car wash and… Our price was ten to fifteen dollars higher than the other shops in the area for their oil changes.

Much of our advertising and promotions featured free pick up and delivery of their car with the service or product being the secondary focus.

I don’t tell you this to brag about how great of a job I did marketing and growing that business. I mention it to show that when your marketing is about what your prospects and clients want versus what you offer or want them to buy, you can reduce, if not eliminate, the possibility that you will become commoditized and have to compete on price. Your prospective buyers can NOT compare apples to apples when looking at what you offer versus what others who do what you do. 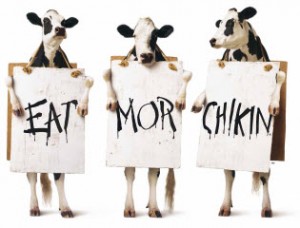 I recently presented a marketing workshop here in the Cleveland area where I talked about being about more than… I asked those in attendance what they knew about the fast food restaurant chain Chick Fil A. Immediately, the unanimous response was they’re closed on Sundays; when I asked what else, the response was they use cows in their ads. Nothing about their food, their service, their restaurants or any of those things that all of their competitors have. When pressed they talked about how they had better service and…

The bottom line is they made their advertising about more than chicken!

One of my earliest clients was an attorney that came to me about helping him market his practice. At the time I didn’t really want to take him on as a client, but once it was determined he was willing to pay the fee that would make me willing to work with him, I went through much of the same process of finding out what it was that his prospects really wanted. I won’t share with you what it was, but I will tell you that I developed several ads addressing that very “thing” they (his prospects) wanted and really made the ads about that and not so much about what he did as an attorney. Due to his budget, we weren’t able to compete with the other half page and full page ads that his competitors had. I can tell you that within hours of his ad hitting the streets, his competitors were calling to complain saying “you can’t do that.” I knew then we had hit a home run.

The ad wasn’t focused on legal services; it was focused on what his prospects wanted. I used that ad campaign for several years building his practice to the point that he needed to bring on another attorney. All because his marketing wasn’t about his practice of law, it was about more than that.

If you’d like help differentiating yourself or how you can be about more than your product or service, contact Lois in our office (440-842-8938) to see how I can help you. Over the years I’ve been able to show people some powerful differences so they can be about more than… Seldom are they aware of it, but if they are, rarely is their marketing reflecting it.

In conjunction with this you I’m holding a Marketing Workshop on Tuesday June 17th where I’ll share 18 Ways to Extract Maximum Value from YOUR Own Customers!

For more info and to register online to attend go to www.NoBSCleveland.com or call Lois in our office at 440-842-8938.